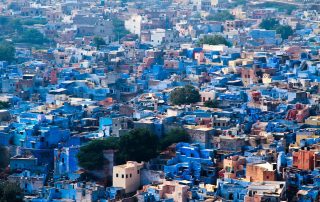 The Diwali Festival has brought back memories of the remarkable night we spent last year in the blue city of Jodpur. We had been joined on our travels by our good friends Carole and Neil and were spending the two weeks we spent together in relative luxury by treating ourselves to a hire car and driver to take us between destinations.
What we had not realised until arriving in Jodpur was that we had arrived during Diwali and the roads we needed to reach our guest house were closed to allow the throngs of shoppers to spend their rupees in the traditional buying spree. We eventually arrived at the lodgings by parking up on the towns’ outskirts and jumping into a couple of tuk-tuks which transported us through the narrow back streets. At dinner that night we were surprised by the appearance of our driver who produced, from under his jacket, a gift of a bottle of whiskey for us. The noise of the fireworks outside was escalating and once we had finished our meal we decided to go onto the roof and enjoy the spectacle. The five of us joined a handful of guests and sat supping whiskey and beer and munching on finger chips as thousands of fireworks burst from the houses across the city. The noise was deafening as flashes from crackers burst every second and hundreds of rockets filled the skies. Many were simple trails of light but periodically the entire sky would light up with a great umbrella of colourful light which seemed to envelop the entire cityscape. We sat and wondered at the spectacle for hours until the need for sleep fell upon us but this proved difficult as once back in our room there was no respite and the doors and windows rattled from the explosions outside and it continued all through the night. It was a joy to see the pleasure and enthusiasm for the festival that the townsfolk enjoyed and an experience that will stick in the memory forever.