India on the buses

Apart from the occasional jeep, car or minibus our main choice of transport during our Cardamom Days adventure was on government buses. Before arriving in India Carol and I had preconceived ideas of what to expect. There would be overcrowded buses with people hanging off the sides and sitting on the roof. Although this was generally an exaggeration they certainly proved to be very crowded and we did on occasion stand in a crush while the bus was slung around bends at speed while avoiding the oncoming traffic on whichever side of the road was considered the best at the time.

The buses themselves are utilitarian at its most excessive. The outside are battered and dented where presumably the “get out of the way!” horn tooting method has failed and a hammer has been adopted to knock it back into something resembling the side/front/back of a bus. Some have a front and back door while others merely one. When I say door I really mean a rectangular hole in the side of a bus which sometimes has a door and often attached to a piece of string to help open and close it once the bus has pulled away. The occasional complete lack of doors is a bonus to passengers who wish to leap on and off despite the drivers determination not to stop unless at a bus stop. 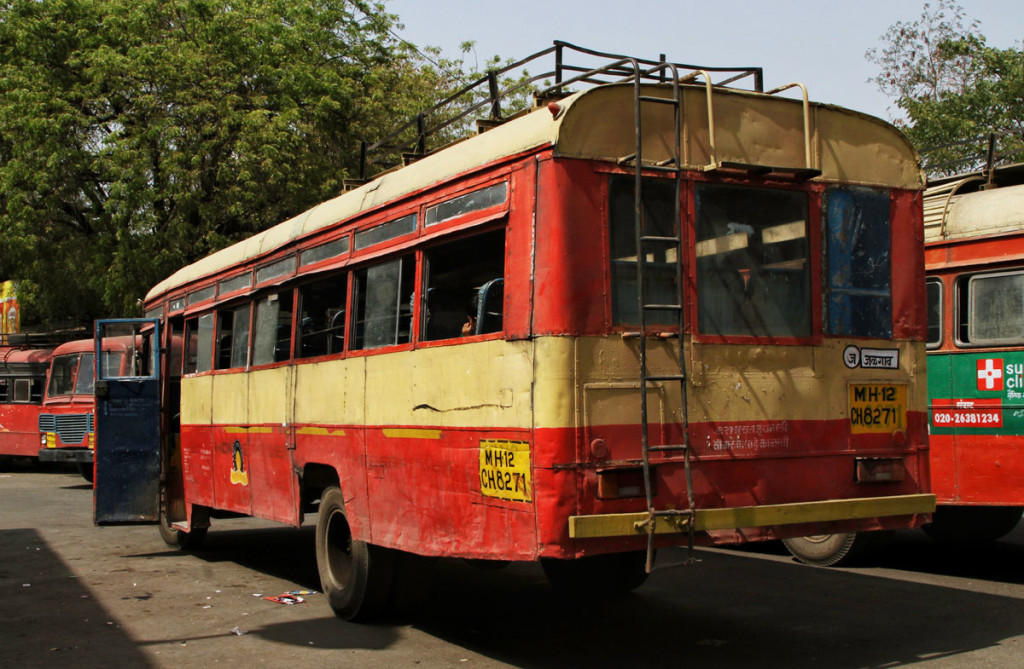 Once inside the vehicle we are treated to blandness that only battleship grey has the power to inflict. The metal frames of the seats are painted in battleship grey and charmingly the two inch frame is painted with the same four inch brush used on the walls and ceilings and so adds a lack of colour to the rear upholstery which tends to be in a more acceptable shade of light grey. The seats are thin and uncomfortable and usually covered in plastic so as to add to the joys of overheating in the 35 degree temperatures although the usual lack of glass in the windows does help the cooling process a great deal. I bet monsoon season is a bundle of laughs. The rest of the interior is purely functional with a string leading down the length of the bus until it reaches a bell near the driver. This, along with whistles and fist banging is the communication method between the driver and conductor. There are often bits of mysterious electrical wire hanging from the ceiling and around the drivers cab and other bus parts show their value by being secured to the controls with string and bits of shredded carrier bag.

Every bus though does offer its own unique splash of colour amongst the otherwise drab interior. The driver always has a display of representations of his own chosen deity either as an image or effigy or both and often festooned with strings of fresh flowers and tinsel and this brings with it an element of reassurance in what is otherwise a white knuckle experience.

Finding the right bus to catch at the large and crowded bus stands was an education in itself and a real example as to the kindness we were often shown during our travels. Very little English is spoken by the officials but showing our desired destination written on a scrap of paper would usually bring the desired assistance. Often we would be sent to a far corner of the stand with a wave of the hand and once we arrived at a spot close to that indicated we would ask again and be ushered to another spot. Continuing this process we would walk in ever decreasing circles until we found a waiting bus or someone would point to the ground and tell us to wait. What we found amazing and endeared us to this process was that once our bus arrived at the place where we had been told to stand everyone we had asked regarding directions would suddenly appear from all directions and ensure we boarded the bus safely and often secure us a seat and arrange for somewhere to stow our back packs. There were exception unfortunately, such as the ticket seller who refused to sell us a ticket and the group of men who hustled and bustled me until they managed to nick my wallet but generally we were treated with nothing but respect and kindness.

The people at these government bus stands, the drivers and conductors and the other passengers (we only saw about six foreigners on board in all the months we were travelling) were a revelation and provided us with so many tales to tell that we think that our adventure would have been all the poorer without them and we would recommend them to anyone with time to spare and an extra sense of adventure.

The private buses though are a different story altogether…