The journey has begun as Carol and I head off towards Chile to begin our 12 week trip from the hot and parched Atacama desert in the north to the chilly and windswept Tierra del Fuego in the south, a distance of approximately 2,700 miles. We intend to cover most of the distance by bus which we are led to believe are some of the most efficient and comfortable in the world. We wait to see.

The flight to Santiago, via Atlanta, was a long 21 hours in total and although arduous it proved uneventful and frankly we were grateful to be flying at all. On arrival at the Heathrow check in we were asked for our U.S. Visa Waver number. “Our what?” we asked anxiously.. Now, we knew we did not need a visa for Chile and were merely in transit for two hours in America but apparently need to apply online for permission not to have an American visa. Complete news to us but the authorities would not let us fly without one. We could get one online but the US government server was down and we were told to just keep trying and hope for the best. The best finally arrived with just a few minutes to spare and we were ushered onto the aircraft. Phew!

Following a stopover night in Santiago we took a flight north to Arica where we would spend two nights before heading to our northern starting point of Putre. The big surprise for me was the approach into Arica. We had enjoyed stunning views from the plane with the Andes on one side and the rugged coastline on the other but as we descended all we saw was the town surrounded by flat, featureless desert except on one side where the port stood and where the imports arrived explaining the town’s existence. We used our time here to adjust to our new surroundings and get a feel for what was to come and what we were soon to realise was how friendly, kind and helpful the people of Chile are, although it may sometimes prove challenging as there appears to be no English spoken here and we would be relying on Carol’s rusty “O” level Spanish, my incoherent sign language and the patience of our hosts. We managed to find a collectivo, a taxi that picks up multiple fares as it travels the streets, to take us a few kilometres out of town to the river fed Azapa Valley oasis where we enjoyed a stroll around the near deserted streets of single story dwellings, a hugely colourful cemetery where brilliant humming birds darted between the flower offerings and then we visited the small but very well presented museum of artefacts relating to the early tribes of the area. This provided us with an excellent grounding for the return journey when we asked our driver to take a detour to show us the geoglyphs scratched into the hillsides centuries before. 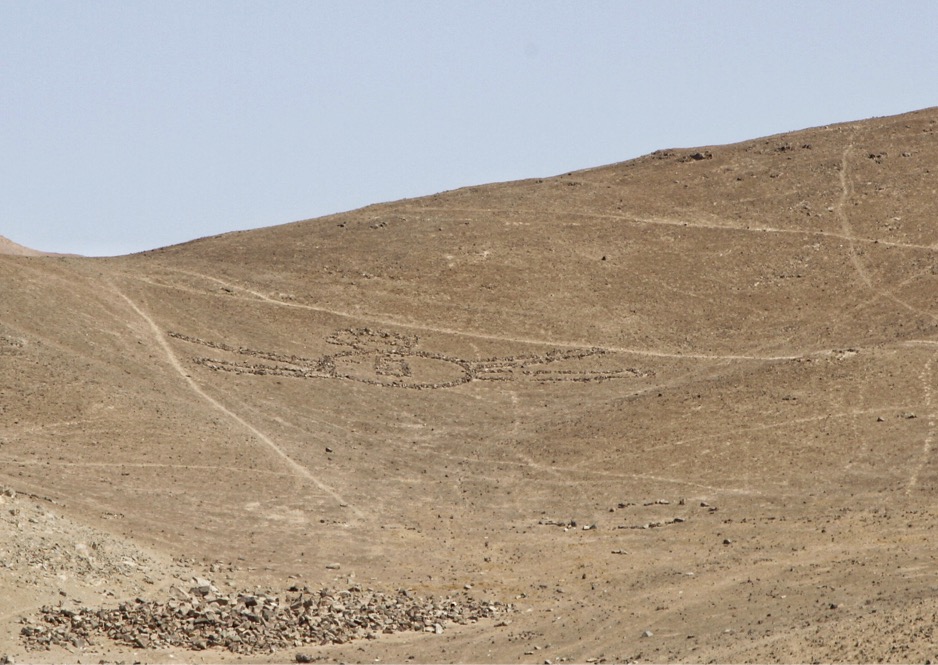 On next to Putre which I regard as our starting point as it is the most northerly stop before heading south. A very small town of around a dozen criss crossing streets, a handful of small stores and restaurants and a sleepy town square. This was to be our base for travelling into the less hospitable area of the Altiplano, the second highest Plateau in the world, very arid and surrounded by volcanoes, both active and dormant, at the widest part of the Andes. The air was very thin and although we had acclimatised a little, movement and breathing was still slow and laboured at this altitude, around 4,500 metres. 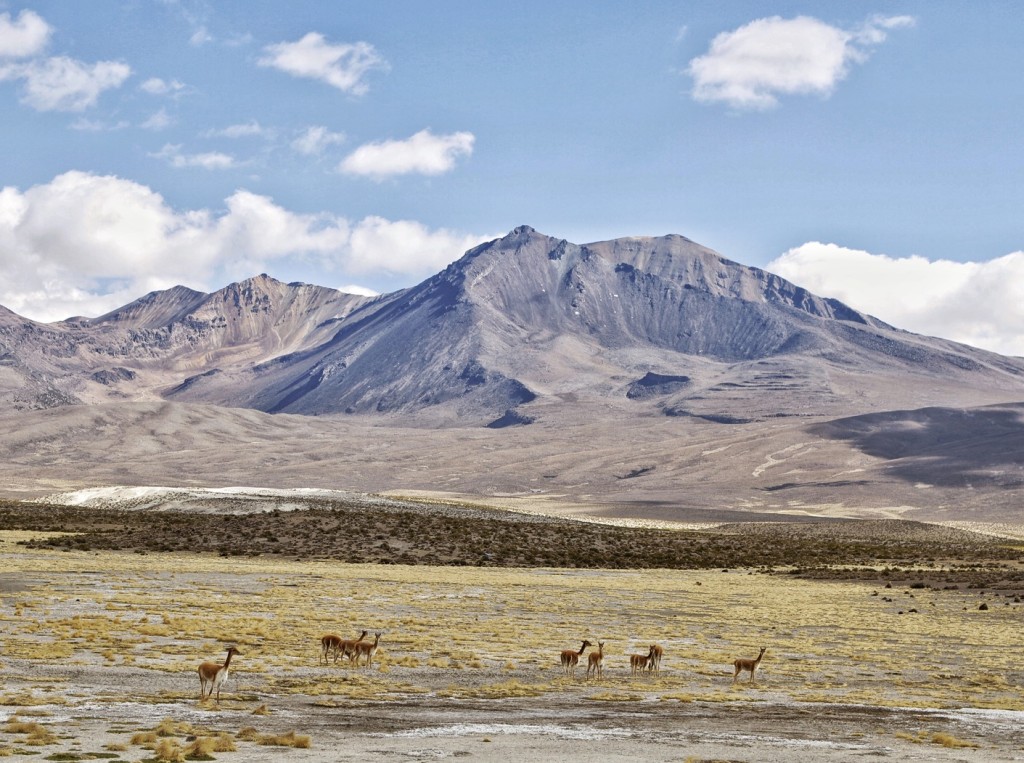 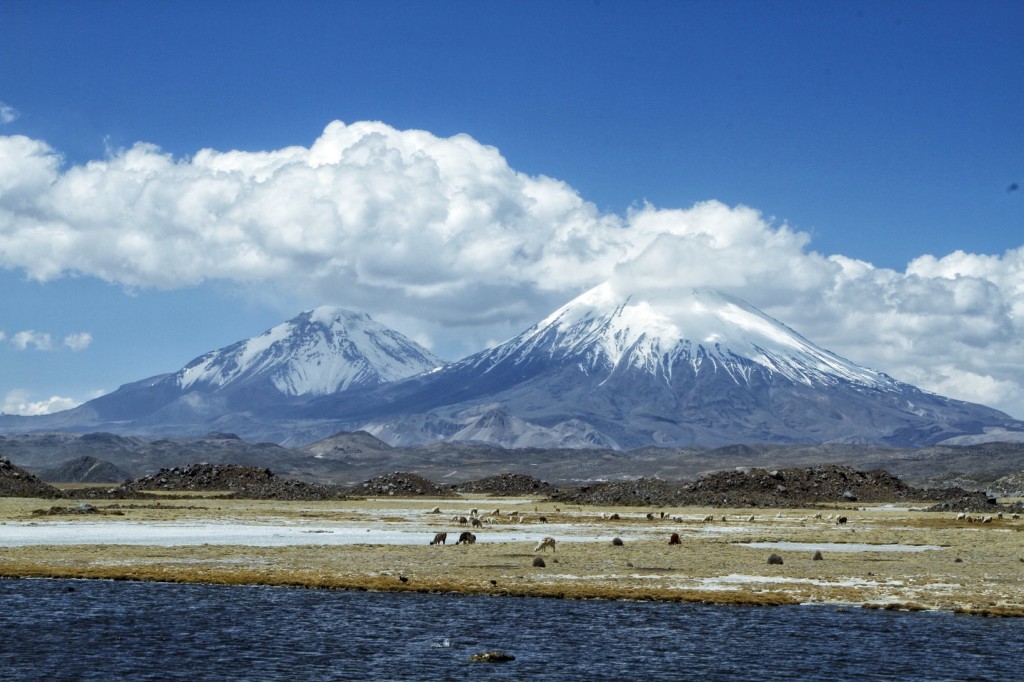 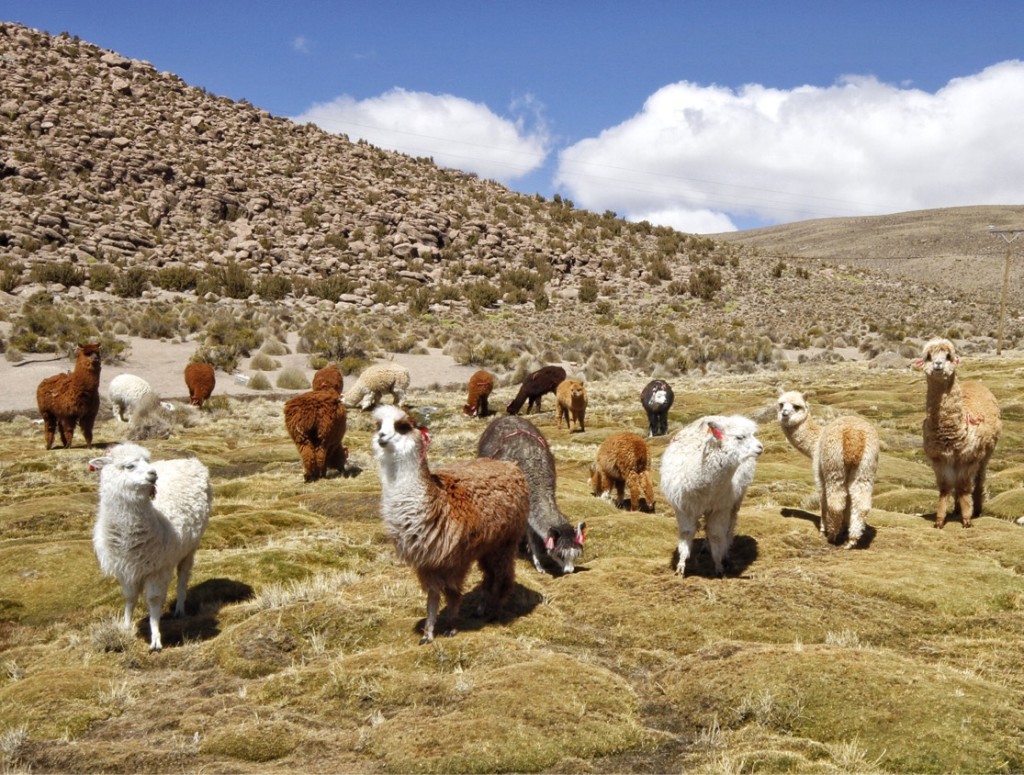 Despite the harsh conditions we were amazed and delighted at the life we saw here. Domesticated Llamas and Alpacas were seen grazing the sparse vegetation and we came across several groups of Vicunas, their wild relatives along with some rabbit like Viscacha who tried to join us when we stopped for lunch. Birdlife was also abundant, to Carol’s delight, but the real prizes to add to her growing bird list were the Ostrich like Rhea we came across and the mighty Condor that appeared from a volcano top and circled ever nearer before disappearing once more into the distance. I mustn’t forget the flocks of pink flamingos that waded in the shallow waters around the vast salt pans that dot the area. 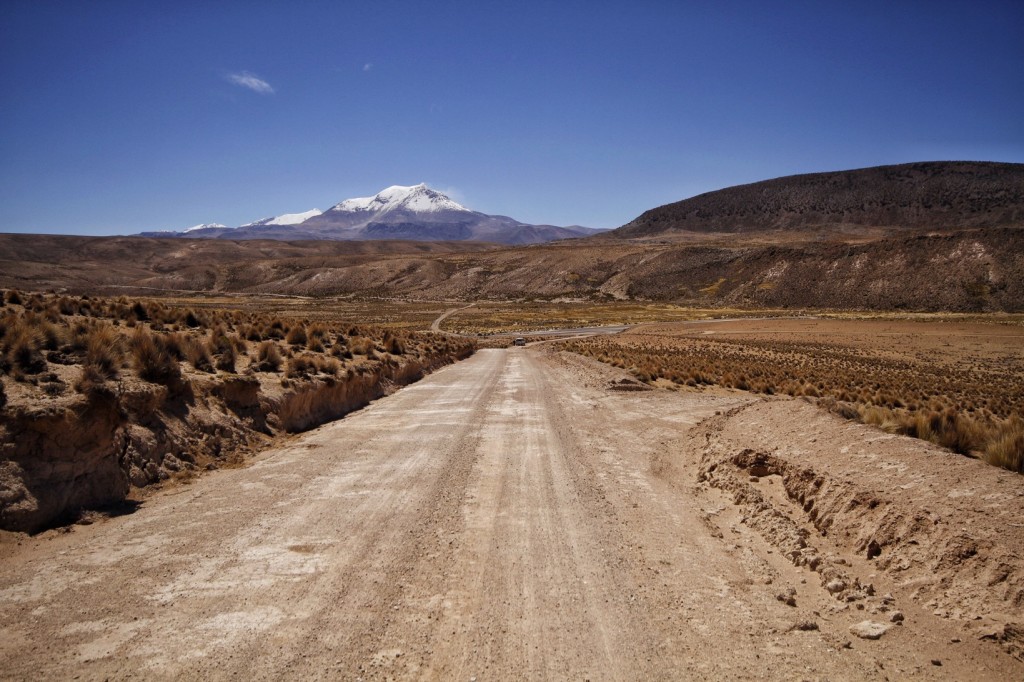 Heading for a smouldering volcano 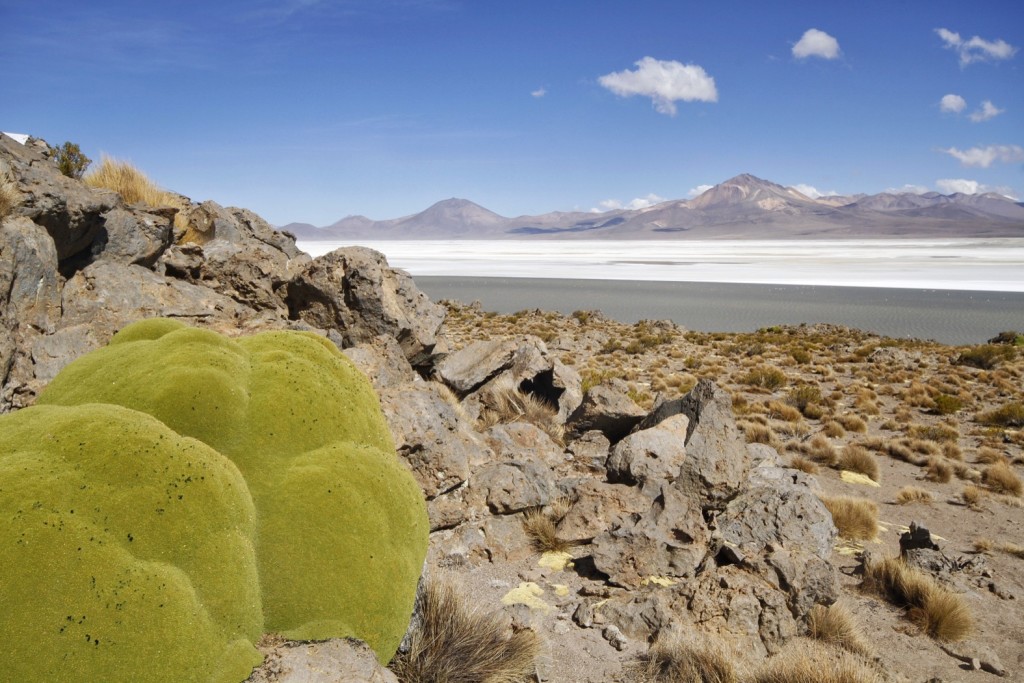 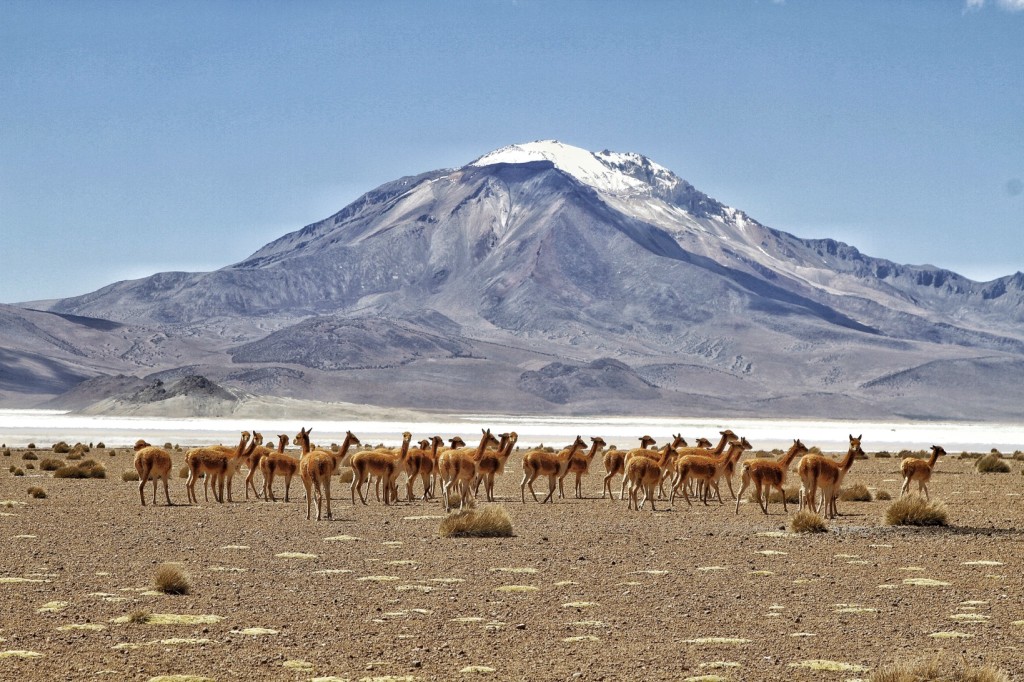 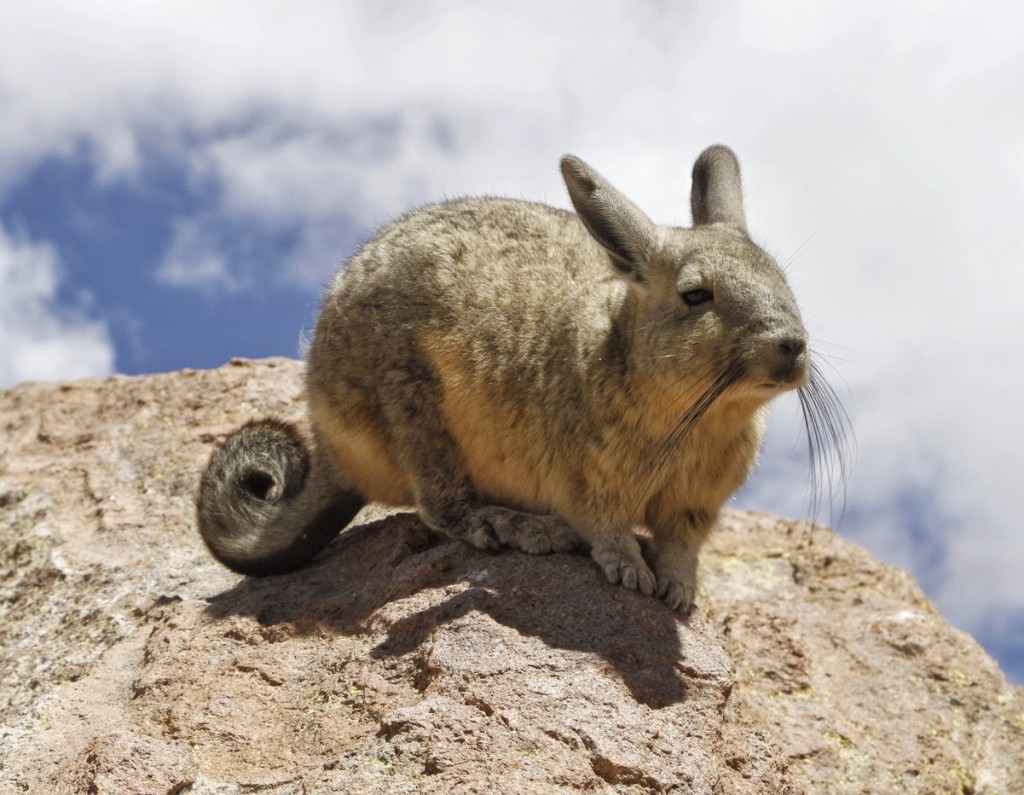